As the title suggests, i found a bridge support a tad too low when crossing the bridge to go from San Francisco to Oakland.
I was doing about 50km/h and picking up speed after coming off the long wind up to the bridge, when i was passing under the very first support, it brought my truck to a dead stop and done some minor damage to the trailer.
Cargo was the milling machine. I think it was the very end part that sticks up in the air that got caught on the support.
I took some screenshots of the map and where it happened to show which support it was.
Version of game : 1.34
64bit
Reproducibility : Once so far. (Will see if i can reproduce it by getting another milling machine.)

Yellow ring around support indicates the suspect that brought my truck to a stop. (It is the cross piece section i am referring to.) 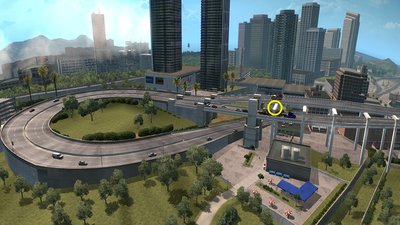 Zoomed out shot of map again of where i was at the time of accident.

It is really easy to find this spot. But here are the coordinates:

This one was reported many updates ago, can't remember exactly when. But without either changing the bridge prefab (very unlikely) or not permitting the milling machine to spawn in SanFran, SCS has very little solutions available.
Top

All they have to do is alter the height of the bridge support or lower the road. I cant see how this can not be fixed. Should be easy to do. There'd be a fix for it, im sure of it.

Yep, everything is so easy to do.

This was actually reported as "not a bug" in the past, as IRL, this bridge has a height restriction on it. Oversize loads should use US-101 North or South to leave San Francisco, and then use I-580 to loop back to Oakland.
"Don't try extra hard to make your presence known, but make sure your absence is noticed."

You clearly havent done anything with graphics engines then. There would be no coding involved with that bridge that affects the height of it. They go into the engine, grab the support and raise or lower it, done! So, yes, it would be easy IonutL. Also, if they have little solutions, then how did they even make the bridge to begin with?? lol

LeafeonGold,
Im going to check something out in game later when i get on it, then i will comment

So, i had a look on google maps, in and around the area leading up to this bridge. There are signs before even getting to the bridge saying " Caution. Vertical Clearance of 14' - 8" on bay bridge".

The problem we have here, is people are reporting this as a bug because of a number of reasons. 1, No signs anywhere in game saying "No oversize loads on bridge", for example. 2, GPS still tells us we can go over bridge. 3. No heights given on loads we pickup in game, which brings us back to point 1, being no signs of telling us of height restrictions ingame.
No one is going to know this until we report it as a bug, then we get told its been reported, til later on someone else reports it.
So, a bit of coding attached to oversize loads which is also attached to GPS ingame, telling the game, ok, person has picked up oversize load, have to redirect them the long way around to get to Oakland from SF or to SF from Oakland, for example, so the GPS will not take us over the bridge.
Or easier method, would be to give us a way of knowing heights of our loads, and heights of bridges and then post up signs along routes so we know if we can or can not use a certain bridge.
Or, just make it so all loads can pass under all bridges. Which probably wouldnt be so great. But it would certainly be better than not spawning oversize cargoes in the areas with low bridges.

This link, is of google maps. One of the signs are over the road, for the bridge ingame. I checked in game to be sure i wasnt being blind while driving last night lol, but definitely no signs anywhere warning us drivers. If i had've saw a sign saying " NO OVERSIZE CARGO ON BRIDGE" or something to that effect, i would have avoided using the bridge, and some humiliation by posting a false bug report on the forums

If you are going to make the game as real as possible as in this case with ETS2 and ATS, then signs should be a must and maybe even some coding for GPS as a failsafe. Who knows, maybe the devs will see this and have a good chuckle, but then implement something like this.