Some newbie driver wrote: ↑
16 May 2020 17:14
There are lots of traielr companies in Spain, Leciñena is just the most internationalized (they have at least 1 factory in France). I wrote a list of manufacturers in the pre-research months ago.

Hi all,
I've read some posts of this topic and I wanted to clarify this, don't take me wrong, it is just my knowledge.
Leciñena is less important than Lecitrailer (although it is very common to see their trailers around Iberia, and they're older than Lecitrailer itself).
Lecitrailer was created years ago (I think in 1989) by a group of 45 Leciñena's workers who wanted to start from 0 and created their own company. The coincidence is that the principal founder of Lecitrailer is also called Leciñena (Fernando Leciñena) , so that's why the Lecis in both names, but they're two diferent companys.
Anyway, I don't think SCS will include new trailers in the DLC, though as a Spanish I would like to see a Spanish brand DLC, we'll see!
Sorry if I sounded rude in any moment, wasn't my intention

No rude at all @RodriGM15; you don't need to apologize about nothing.

I always thought that LeciTrailer was a second brand of the same Leciñena group, created as a new brand to improve internationalization of the whole group. But I can't say that I've deeply investigated the case. What I'm sure is that Leciñena keeps building lots of trailers but probably LeciTrailer is more well known on Europe overall because LeciTrailer has also factory in France (and I don't know if also in other places outside Spain).

Yep, you're right @Some newbie driver , Lecitrailer owns a big centre in Lyon, but if I'm not wrong it's their only spot outside Spain.
It is true too that Leciñena is very present in our roads too, especially in tautliners

It will be fantastic when I will see this landscape also on ETS2.

Do you guys think this as a possible map for Portugal? 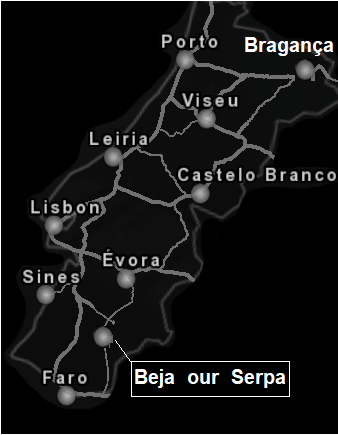 Yes! I think this map of Portugal is possible but I would place the city of Bragança as I have already mentioned in other places because a city is very important in Portugal and is located in the region behind-the-hills and not impacted on the map of Spain so some, and adding the city of Beja or Serpa ,then the map of Portugal has 10 cities it would be perfect it would be the ideal map of these Portuguese cities!
Last edited by plinio.lisboa.br on 23 May 2020 21:27, edited 1 time in total.
Top

it just miss the northern extension from Viseu to Spain.
Top

good night.
How is the space to discuss how the DLC Iberia can be developed.
So let's apply a map that at least is how I imagine the DLC Iberia Portugal could be so having 12 playable cities.
Including important port cities Setúbal and Portimão and also other cities are worth mentioning in; Bragança, Chaves, being added and optionally in my opinion SCS could choose between the city of Beja and Serpa both are important but are in a very important geographical position and very close then would have to choose one of them in any case would represent this region of Portugal well. 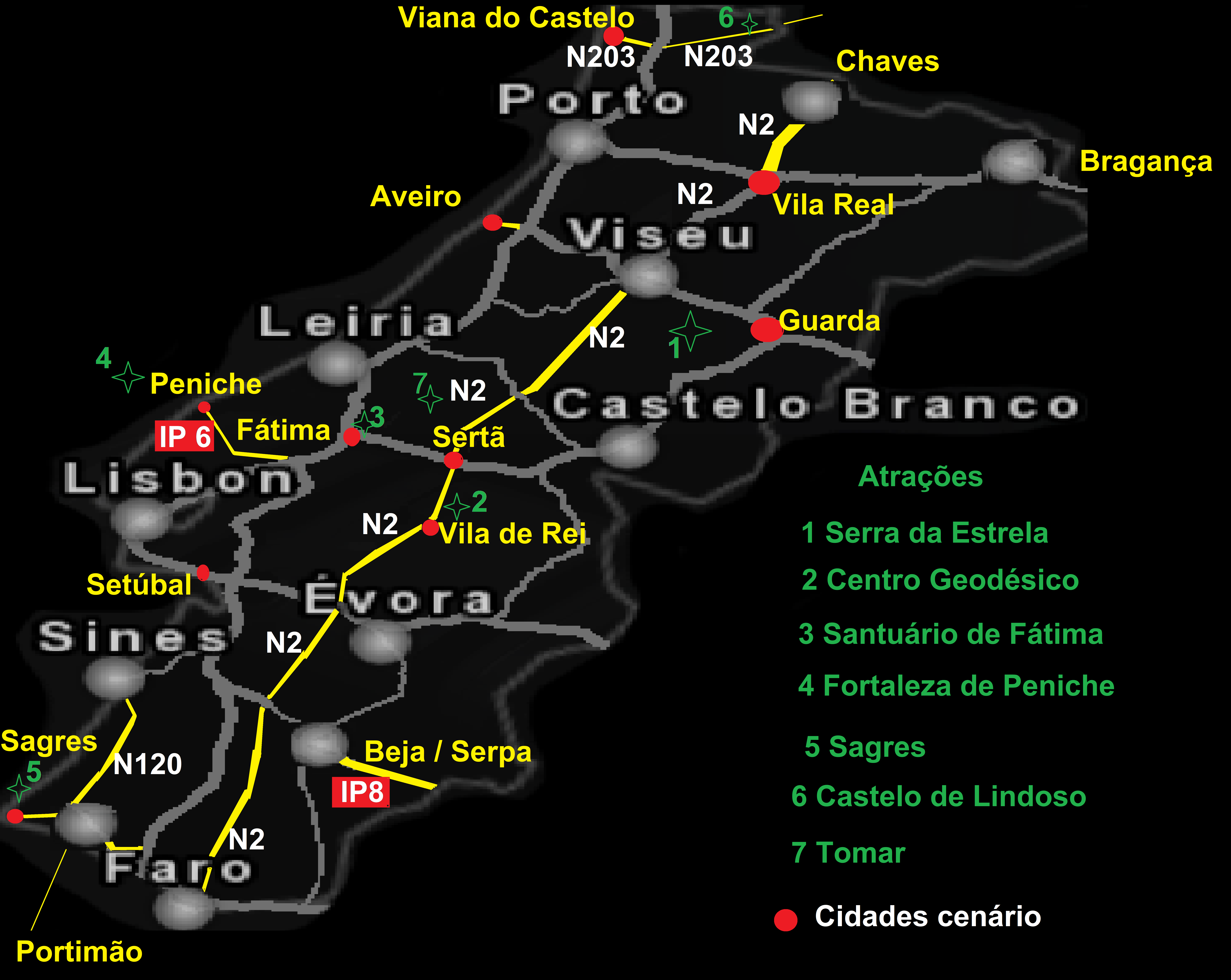 Let's talk a little about the highways, if I were someone from SCS Software and were to develop the maps of Portugal we should start from the basic principle that most of the important national highways in Portugal they are from North to South.

So I would try to make the map above, including the N2 highway from Chaves to the city of Faro, because it is the most important historical highway that Portugal has and allows the traffic of cargo and goods throughout the central part of Portugal from north to south from the country.
Other highways that are gray in color do not need to comment because they are important, and are already included in the concept maps and form the basic network of highways.

The city of Beja or the other neighboring Serpa, could be included IP8.
Including the small village of peniche, as a scenario city, then the inclusion of IP6.

The cities marked in red: they would be a scenario city or a secondary city with one or at most two loads available. The importance of this city scenarios are multiple, but I could summarize that they are very important cities for Portuguese culture, logistics or tourism.

The green numbered stars are a short list of attractive places and are written in Portuguese:
1 Serra da Estrela - is the place that has the highest point in mainland Portugal and is also very important in the area of agriculture with the famous star cheese produced in nearby cities and villages and is a product exported to the world with milk that is produced in the extracted mountains of sheep is also very important because it is a large scientific center with astronomical observatories and are located at the top of this mountainous region and therefore for the Euro Truck 2 game it would allow scientific cargo over there besides being a very beautiful place with a wonderful view in life So it would be something Spectacular if there were in the game.

3 Sanctuary of Fátima - the city of Fátima stands out a lot in the economic area for having a rare marble and the only one that is called the marble of Fátima I will not go into details here because I am not a specialist in marble although in my family for its some marble specialists in the State of Rio Grande do Sul who work with Marlon with a marble factory As far as I know it is a region with a great mineral activity in this area of extraction of marble rocks and the importance of the Sanctuary of Fátima that is in this city beyond its beauty is a great cultural attraction and a great symbol of the religiosity of the Portuguese people and also of the Portuguese truck drivers.

4 Peniche fortress - It would also be very important to have a whole game map showing a little bit of the coastline that Portugal has because of a great diversity of coastline from beaches to cliffs.
So the country of Portugal and its coastline is very interesting.
There is a great identity between the Portuguese people and the sea, and this is notorious for its monuments, its heroes, but also in its music, its literature, its politics, and Peniche has a very well preserved fort for protecting the coast, in addition to the city to be a tourist for beaches, it also has this very beautiful attraction, and it would be really cool for truck drivers in Euro Truck 2, to be able to get there!
Look at the vast ATLANTIC from your own eyes and also visualize the fort, who knows how to get good screenshots of your truck with the fort in the background.

5 Sagres - is a historic city and very important for Portugal in terms of history There are many monuments there, natural beauty and also in the important fishing sector.
Yes, it was Sagres that developed all Portuguese technology and all nautical knowledge for ocean exports, which resulted in the discovery of new continents such as the Americas, Africa and Asia, Oceania.

There are many interesting things there; stunning landscapes, fortresses, headlights, I believe there would be very good opportunities for fantastic videos and screenshots of the trucks of the various brands in the ETS2 game. It would be fantastic as a scenery city and its attractions then made in a more detailed way and there we could deliver the fishing boats and pick up Seafood as and distribute it to Portugal.

6 castle of lindoso - it is a great attraction on the route of the N203 highway the first fort for those entering Portugal from the north end of the country it would be very interesting to include the N203 highway as an isolated highway where you can arrive from Spain directly to Viana do Castle.

7 Tomar - Tomar has great tourist complexes with cathedral forts and many other preserved things including an old industrial area from the 18th century, it was the first industrial city in Portugal and also of great importance for the recovery of Portugal's sovereignty in the Middle Ages, it it was the former capital of Portugal, and at the same time it was Fronteira de Portugal. It was from this point that Portugal began to reverse foreign occupation from North Africa.

To conclude even though we can have 12 playable cities although the most realistic would be to have 10 playable cities, to start with the Portuguese map, but many other cities would be out as is the case of: Extremoz, Óbidos, Estoril, Santarém, Abrantes, Covilhã ( this city is very important) Figueira da Foz, Guimarães.

I hope I contributed to the discussion
Top

Sorry, but 12 cities in Portugal is too much, especially when you consider that it is combined with Spain, twice as large as any DLC before. If we had more than six large cities in Portugal (and more than two small cities), I would be surprised. Also, it would probably be impossible to have twelve cities as landscapes would have to overlap, which would result in a loss of quality. It would probably be better if they put those extra cities in Spain, which I'm afraid will probably be as hole-y as Romania. (Let me be positively surprised.)
The longest delivery in ETS2: Istanbul-Aberdeen
YouTube channel
ETS2 map
ETS2 concept map
ETS3 concept map
Top

Good morning, that's why I like to exchange ideas with the players and with the developers I haven't had that privilege yet, but I'm a very "suspicious" person to talk about Portugal, I like it a lot.
So I think that the more important cities in Portugal you can have on the map the better.
I believe that 10 important cities in Portugal is a good start.
12 cities for Portugal would be ideal but realistically 10 playable Cities are possible.
An important observation that has to be made: because I made a conceptual map that shows the city of Bragança, and Serpa or it can also be the city of Beja.
Why the position of these two locations is important for the economy of Portugal.
Many other important cities on a map that has cities. They will be left out although, I can make a list of cities here that SCS Software should add it over time on a map with more than 10 cities come on this list: Viana do Castelo .Chaves. Vila Real. Guimarães. Guarda, Sertã, Santarém, Estoril, Caldas da Rainha, Fátima, Abrantes, Beja, Serpa, Covilhã.

The port cities could be on the ideal map Concept. The ports: of Matosinhos, that serves the region of Porto city, Figueira da Foz - where there are shipyards and the port terminal of Aveiro, Port of sines, Port of Portimão, the port of Lisbon, Port of Faro.