@KnuteOle Killeen or Bryan are not bad guesses but I'd go with Sulphur Springs, Corsicana, Greenville, Nacogdoches, Huntsville or Harlingen yet too close to a marked city or not a ton going on. I think all those are scenic. All are on the high side of small city. They are too large imo to be considered a town. They are on the bubble for marked or no marked. Killeen is a military town and I don't think it makes the game honestly because SCS doesn't do military. Now the last one I have to disagree. I think both Tyler and Longview are marked. Why, there is 37 miles in between. Spokane and CDA have 33 miles in between. DFW has 32 miles in between. All these are less than 40 miles apart and all will be marked. Short distance, yes. Luck of the draw. East Texas will need at least 4-5 cities marked imo. I am going with Paris, Tyler, Longview, Texarkana, Lufkin and Beaumont for cities East of I-45 and US-75. There will be just as many scenic towns/cities. SCS can't go too overboard though because if they over populate East Texas would go from rural to urban. There needs to be a sense of scale with lots and lots of thick green in East Texas. East Texas is the coastal plains region and its the wettest and greenest. One small town that does deserve to be marked that is Omak or Coleville like is Brenham, Texas. Why? Honestly for one main reason, Blue Bell. Its perhaps the most famous Ice Cream company dispensed across the entire South & Southeast. Their slogan is "Blue Bell, the best Ice Cream in the Country" I use to think that as a kid but now that I am older, I disagree, lol. But its a must have prefab. Its a big miss in Texas and to the South.

Although Blue Bell is the main purpose of Brenham, SCS can definitely take advantage of this location. Brenham is located between Houston, San Antonio and Austin in a perfect little center cubie hole. Valmont or DDM Pipe and Steel can make the list of prefabs for the metal industry. Add Premier Metal Buyers scrapyard on the North side of town, Brenham Livestock Auction North of Blue Bell pulls in the Livestock industry. No need to send all our livestock to processing, lol. I vote to create auction depots in ATS. It adds a Western Cowboy like feel to Texas and another place to haul livestock of all kind to. Mainly Cattle and Pork. Then you have both Home Depot, Lowe's and of course....Walmart. Walmart is playing itself out though. I'd try to start limiting Walmarts. They can't be the only place to delivery too. They are consistently in every marked city in ATS. There is an HEB North of Walmart in Brenham. It would be the perfect alternate. Its smaller and takes up less space. So even though I stated Blue Bell is the only reason, more can certainly come to Brenham. Blue Bell is just the main ticket item. Not only in town, but in all of Texas and as big as Texas is, its the only one in Texas. There is also one in Broken Arrow, Okla and Sylacauga, Ala. So this one in Brenham, can get recycled 2 other time in all of the US.

@averyc2506 Are you speaking of marked with Amarillo or scenic as well. I don't know a lot about the panhandle but based on the roads I think will come to that area Pampa, Borger and Dalhart are the best I'd say. US-60 and US-87 more than likely make the game. US-87 comes from Raton, NM and US-60 from Clovis, NM. I see them continuing to other destinations. Dalhart is huge on farming and livestock. Borger has a huge Carbon facility and we will need that. Carbon can prove its worth. Carbon is also in tires. We will need tire companies in ATS. Rare site that we could have as its not like they are everywhere. Then there is Pampa. It has tons of oil fields and facilities around. Now I don't know if all these will be marked or not, but I'd pitch for them.
DON'T BUY SHIFT KNOB FROM CSIO OR TA! YOU'VE BEEN WARNED!
*Poll: Choose Next 2 ATS States
*Poll: ATS Flatbed
*ATS Concept Map
*ATS Special Transport
*North American Agriculture
Top

Waxahatchie has a Owens Corning plant so we need a OC parody.
Top

Texas really is going to be impressive when it's here. I'm definitely hopeful we'll see Galveston make it in as a marked city, and I think we will, but otherwise, I'm happy with whatever we get from Texas. I have faith that SCS will be able to pull it off. It'll be a really complex project, especially when dealing with DFW, but I'm sure they'll find a way to make it work. Hoping we'll see it next year, but I'd be fine if it's pushed back an extra year or two as well. The one thing I'm hoping doesn't happen though, is for TX to be the only state to release in 2022 or 2023. I don't think that'll happen, but I don't know that for sure. Anyways, this thread is going to be active for quite a while, I imagine.

Size wise, Texas is similar to California and Nevada combined, so it'll be like they're adding the original launch map to the game -- only with more cowboys.

If they add a new truck to the game for Texas, what should it be?
Visit my World of Trucks profile and say hi!
https://worldoftrucks.com/en/profile/4918521
Top

I made a concept map for Amarillo. Let me know if you guys have any suggestions. 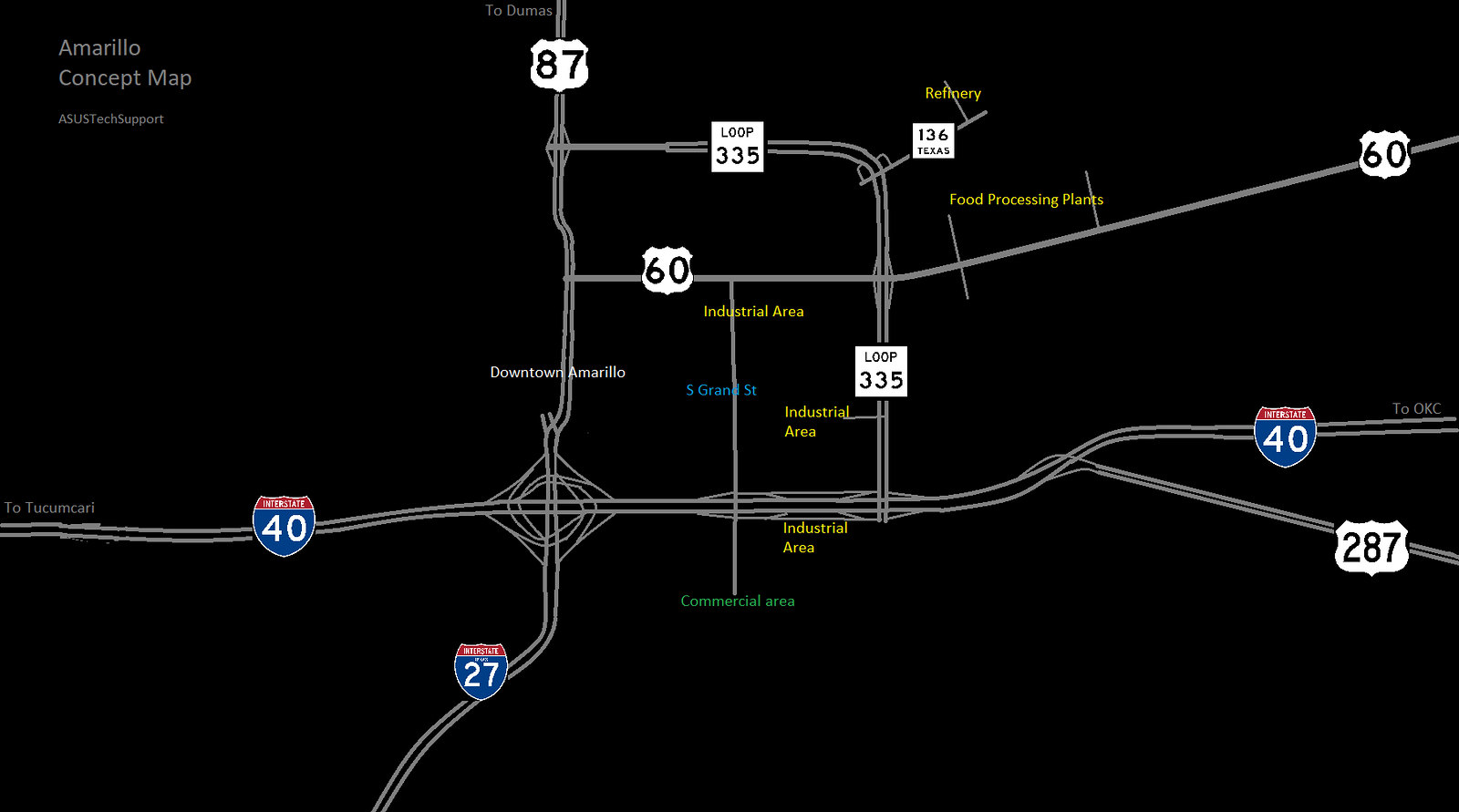 I wonder if Garland , Texas will be featured since this city is close to Dallas.
like to explore new areas of maps for both ATS and ETS2.

@ASUSTechSupport looks good. I would finish the 335 loop if possible as that is a hazmat route around Amarillo.

@Tails I see Garland getting absorbed into Dallas.
Top

And yeah, I agree with Larry71490, regarding Garland.

I’m hopi;g we get exit 880 in Texas, as it is the highest in the Interstate system. Just a random thought.
Top
Post Reply
142 posts