I think release date should be Tuesday next week. Why? Because I'm out of my PC and I won't be able to buy and check it...

Maybe we won't get one today and instead have an Iberia blog on Sunday.

I'll just be simple as each day goes by the release date for Idaho gets closer and closer but I will admit since release day for Idaho wasn't today hopefully I get a constellation prize and have a announcement release date blog for Idaho today for my 30th Birthday lol.
Top

Was just reading comments on this thread it has certainly picked up alot very recently and been interesting to see people's opinions on Idaho. On topic of road miles Idaho could get more than Utah but less than Washington somewhere in between from St. George to Logan is just under 400 miles IRL whereas Jackpot to Sandpoint being the furthest north especially from a recent yt video from SCS and that distance IRL is close to 700 miles length of Idaho will put the road miles in a strong position but the width is where the road miles could be less than Utah also factor in Southern Idaho has alot of road networks and US 12 between Kennewick and Lewiston that will also come into play aswell. If we get less road network in Idaho than Utah will it have an impact on me buying it HELL NO. Idaho will open up nicely for Oregon Utah and Washington, without travelling through Nevada so all four will connect nicely then once Wyoming and Montana come that will open up Idaho Colorado even more. ATS will be boxed up and can't wait for that

Looking at the map @ads678 made, I really think they could have made McCall a smaller marked city with only a few drop points, Omak style, and that would have done a lot to make the big open space seem a little less empty. I'm very worried about the reception of this map by the greater community, particularly following Utah.

Also sad about no Mountain Home, but I've been prepared for that for a while.
Check out my Michigan research map!

Freeze338 wrote: ↑
02 Jul 2020 09:28
Tbh if there is less roads than Utah with late release date it'll be a huge disappointment for me. I'll still buy the DLC no matter what because I'm a huge fan of ATS. But I won't recommend Idaho for anyone who just not buy DLC's immediately like me just like I don't recommend Utah. And we all think Utah get more negative comments and less sales comparing to Washington. I don't want to see Idaho like that.

I recommend them to wait until SCS release Wyoming and Montana because %30 of roads in Idaho will be a connection road for those states. They should make a bundle for Idaho-Montana-Wyoming, other wise buying only Idaho makes no sense.

I even disappointed about Utah due to the road lenght, I hope Idaho will have at least 3500 miles road like Utah. Actually 3500 isn't enough but when I see the comments I am starting to think negative . After they announced Idaho I was expecting 4000 miles road with mid May release.

I disagree yet I agree. Like you, I will buy no matter what. I am too much of a fan to not buy it. But Idaho just doesn't have the road network to begin with nor the density of Washington. It too will get judge based on Washington. I've been an advocate on what I think helps Idaho. Doesn't mean it will happen but it definitely doesn't go against Idaho being disliked. I too definitely don't want to see Idaho go on the negative side like Utah. Although I'll never say don't get something, I can agree for those not hard core fans to wait for discounts. I am a day one within the first 15 mins buyer. I think if Idaho is anything like Utah, 1-2 bucks off would ease a ton more people. But I too am starting to get a bit worried for Idaho. Despite all the efforts and it looking great, it could indeed still fall short.

I think today a blog comes though. If its a Colorado blog, I will be surprised but tomorrow is Friday and as someone stated, Idaho's bday. Tomorrow could be SCS's plan all along to say something. Either two Idaho blogs back to back, or a split with something else. But I am baffled that we are this close and still not Idaho summary blog. That thing usually comes out at least 2-3 weeks before the dlc does.

@Bedavd good point. What did happen to Mountain Home. That isn't on the achievement which is why I didn't think that list was official. But no Mt H would just mean it's scenic. Way back in the beginning, I counted Mt H out anyways. It wasn't until one of the blogs that showed something deep in Mt H that I thought too it could be mapped.
Last edited by flight50 on 02 Jul 2020 13:49, edited 1 time in total.
DON'T BUY SHIFT KNOB FROM CSIO OR TA! YOU'VE BEEN WARNED!
*Poll: Choose Next 2 ATS States
*Poll: ATS Flatbed
*ATS Concept Map
*ATS Special Transport
*North American Agriculture
Top

@Bedavd, Maybe McCall needs to be ID-21 first to be active (to combine the Id-55 and ID-75).
Because taking loads from Salmon to McCall is a ridiculously long journey.

Mountain Home could have been an active city. There is a cheese factory and a Walmart. Of course, there may be a few more companies.
Top

If SCS is following their Rand MaNally, we can forget about ID-21. Its restricted and with good reason. Way too many curves for long trailer combinations. But yes, Salmon to McCall or worse to Lewiston would not be a job I'd accept. Only jobs I will take from or to Salmon without US-93 to I-90 are jobs South of US-20 and I-84. The best we might get though is US-93 to US-12 since so many dislike the I-90 to US-93 idea. Lolo is feasible as it keeps the big city Missoula, with Montana. If we get ID-3 to I-90 along with US-95, that works.
DON'T BUY SHIFT KNOB FROM CSIO OR TA! YOU'VE BEEN WARNED!
*Poll: Choose Next 2 ATS States
*Poll: ATS Flatbed
*ATS Concept Map
*ATS Special Transport
*North American Agriculture
Top

Just for us to think a little about what could be included from cities in the IDAHO DLC.
There is still time for SCS Software to put some last-minute things in terms of cities. It is always good to bring some things that are new at the last minute. 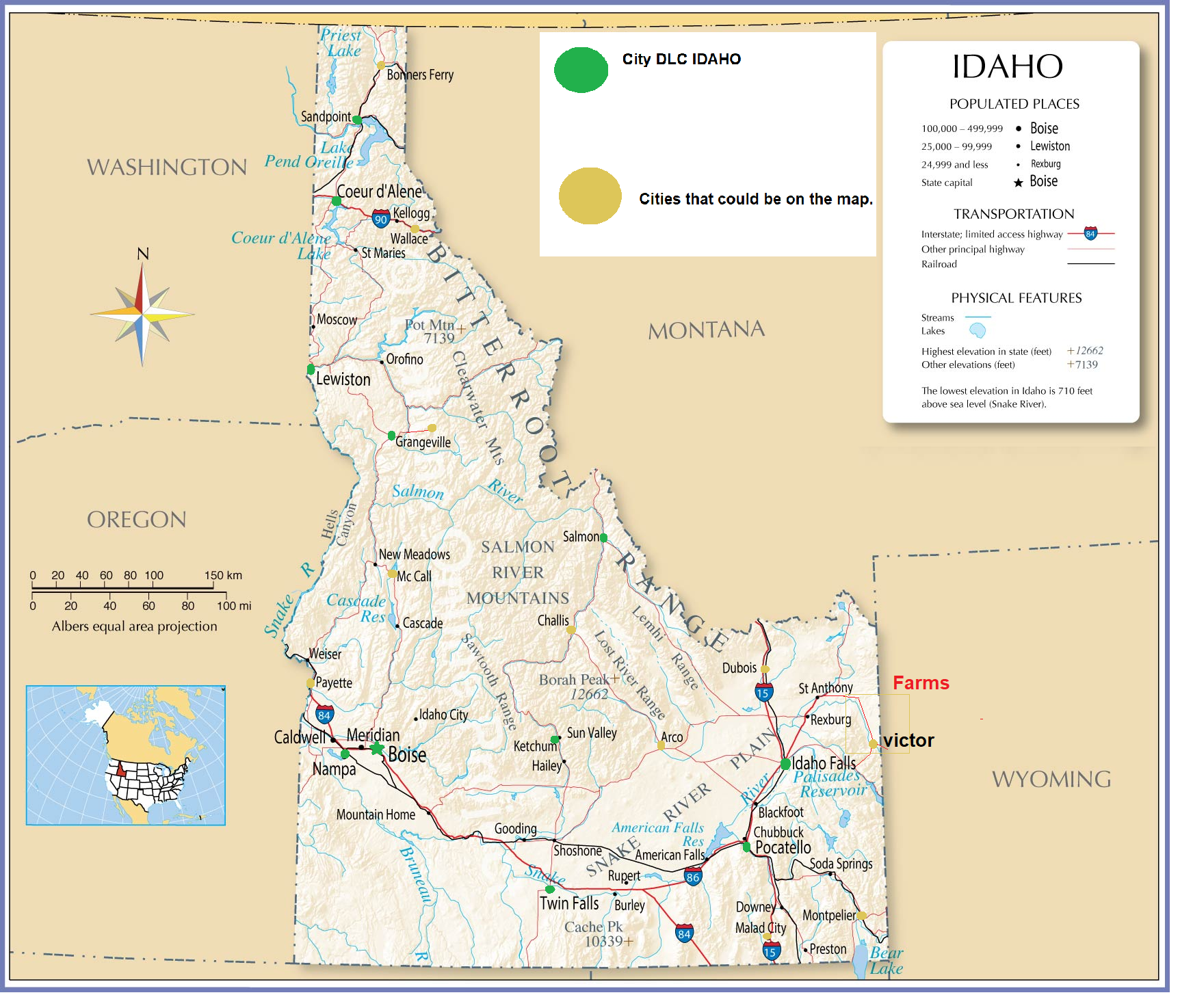