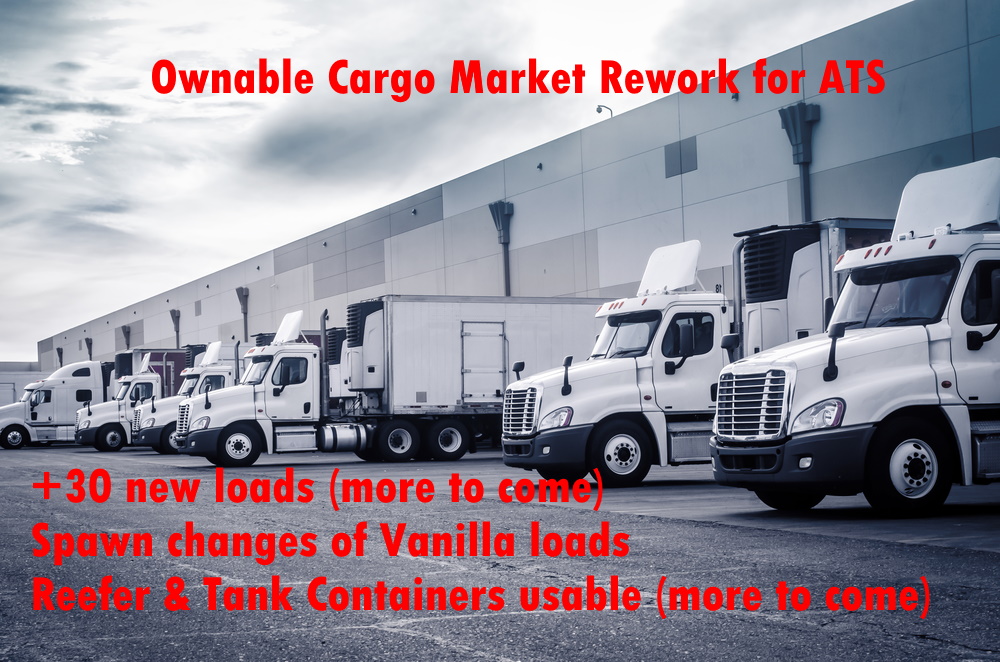 PLEASE GIVE ALWAYS THIS MOD A HIGH PRIORITY IN MOD MANAGER, SPECIALLY ABOVE MAPS, ECONOMY & TRAILER MODS! BELOW THESE I CAN´T GUARENTEE THE MOD WILL WORK AS IS EXPECTED

Tired of hauling the very same loads all the time? Then look no further, this mod is what you are looking for

This mod will add plenty of new loads and will remake how vanilla loads spawn in many of in-game companies. You won´t be hauling anymore a foodtanker directly to a grocery store, for example. You will be able to haul some loads that were restricted to some type of trailers and in the same way this mod will prevent some loads to spawn with the wrong trailer (I really hope SCS correct this in the future)

As a bonus, I enabled the hidden reefer & tank container present in game files. There are loads of them, I just added two for the initial version of the mod. For some reason SCS decided not include them despite the fact they are awesome!

Further description of each individual trailer:

The most reworked type of trailer in the initial version of this mod. Many of the new added loads are specifically for this trailer. ATS is lacking a lot of refrigerated stuff and it does spawn in an awful way. With this mod on, reefers will make you haul like 90 % of the time foodstuff, and big portion of it is temperature-regulated loads. Nothing of this happens in vanilla game sadly, where you haul lots of normal goods and non-refrigerated food stuff in reefers, weirdly.

With this mod enabled, you will never drive again directly from the crop/farm to a small grocery store (a hopper trailer will never directly go the grocery) , you will need to carry first individual crops (such as apples, beans, grapes, and so on) to a wholesale. From the wholesale you will be able to haul bunches of fruits/vegetables (vanilla loads) to the grocery store. I tried to apply this chain method with food processing plants too (Global Mills in-game). Individual fruits/vegetables and also raw meat & milk will be carried to a food processing plant, and from there it will be processed and be ready to send to the wholesale and the grocery stores.

Added a bunch of new loads for dryvans, not so many as the reefers but still a good number. Dryvans will haul now dry stuff (obviously) and only non-refrigerated food stuff. Never as vanilla game where you can haul fruits & vegetables on them.

As mentioned above, I added the hidden reefer and tank containers to the game. Containers can carry now waay more loads. Their company spawn has been signifcantly changed, they will mostly move between container ports and air cargo terminals. I thought it made no sense to drop a container on a grocery store and just leave the place.

NOTE: for a more realistic approach, please always use the 40ft chassis container when choosing a typical reefer load. There is no 20ft or other size reefer container in game files, SCS didn´t model it and I'm not sure if they exist IRL. If you pick a reefer load with other chassis lenght different from 40ft two things can happen: 1. you will be missing the container 2. a regular container will spawn, which is unrealistic for temperatured-regulated stuff.

I added a few loads, and reworked their spawn logic. Foodtankers will be driven now to food processing plants and wholesales, not directly to groceries.

Pretty much the same logic spawn rate as the foodtankers, you will need to drive to the crop plantation in order to pick the load and then haul it to a wholesale or a food processing plant.

Same as hoppers and food tankers, you will drive them from farm/crop to a food processing plant.

I left these untouched, sorry. Adding new loads means they need to be modelled and I don`t have the knowledge for this (blender). All I can do is rework some of the company spawns, but I saw they were pretty much correct in vanilla game. In any case I will take a look on them in the future, but as for now they remain low-priority.

Untouched too, for the very same reasons as flatbeds. Their spawns are correct since they have a very limited use (just logs and lumber)

I think that´s all for now. Please feel free to make suggestions like which loads should I add, or how loads should spawn in a more realistic way. I want to keep improving the mod as much as possible. But be aware that there are many in-game limitations (missing a lot of companies) so there isn´t much I can do without SCS adding new chain of companies to the game.

HOW TO ADD THE MISSING ICONS:

1. You need first to extract the games files of ETS2 somewhere on your PC, this is the base game + Scandinavia DLC, France DLC & Italia DLC
2. Once extracted, go to material/ui/cargo_icons .Copy everything you find in this folder.
3. Now go to C:\Program Files (x86)\Steam\steamapps\workshop\content\270880\2188489481\universal\material\ui\cargo_icons and paste there the icons you copied. Please be aware that I just gave the folder path of my game, yours could be somewhere else.
Last edited by LAFAYET47 on 06 Aug 2020 09:55, edited 13 times in total.
Top

So does this mod only affect the spawning of cargos that you haul with your owned trailers then?
Top

Oh that's Aweeeeesome, the mod I've been looking for since ownable trailers were introduced(because SCS are lazy and after 2 years nothing changed).

@LAFAYET47 , Really appreciate the hard work that went to this.
Top

Sweet. I'll subscribe to the thread to not miss it.

As for 20 ft reefer containers - they actually exist. 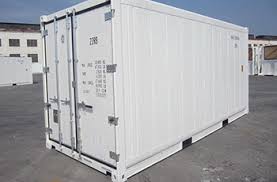 @MiniMe943 Yes, this mod is for the owned trailer market cargo and it also adds new loads as you can read in description. I'm really not sure if it will work with freight, not using this type of market since ages.

@Skoot Well that's cool then, I didn´t know. But as long as SCS don´t add them to game files, I can´t do anything.

@FAres thanks a lot, I know many people around here are looking for this type of mod. That´s why I made it. Maybe @flight50 will start using the cargo market after trying this mod?

@LAFAYET47 that can be a good reason for me to finally get my hands on Blender.

Yes! This is very much well needed. Hauling non-refrigerated items on refrigerated trailers is not very cost-efficient considering the trailers themselves are heavier than a dry van.

Do you also happen to know how common insulated trailers are found IRL?
MY ESSENTIAL MOD FOR REALISM

@Boeing73FLY thanks for the insulated trailers reminder, I totally forgot about them

Well, I don´t know much about them, they just look weird and useless to me (is this a thing IRL?). In my mod it will be possible to haul some loads with them, but not so many. I couldn´t never see what is the point of them if we have the reefer trailers.
Top

This sounds interestign mate, thank you. Can'T wait to try it
Top

@LAFAYET47, I've been watching what you've been doing with cargo files for ages - I've been annoyed with same issues you have. And... now we know what you really intended to get up to! Well done my friend! It's high time someone put some thought into the cargo market and reworked the actual in-game cargo 'demand' system to make it more realistic. I've done a little tinkering on the cargo files of my owned trailer mods and so I know how tedious and much work you put in to make this happen. Great job.

Thanks very much for sharing your work - ATS was overdue for some cargo market love!
Old Fart Trucking - I haul ass, and everything else!
Top
Post Reply
51 posts