I think they should make a priority to finish the CA rebuild by the end of 2022. I don't know how feasible it is, but I think it's a good goal so that by the time Texas is still making money within its first year on the market it can be bolstered by a modern CA. Then they can push to rebuild Nevada and Arizona by the end of 2023. The further out the completion of the ATS base map rebuild is, the more you'll prolong the issue, and the more people who will drop the game after only playing the base game, not knowing that there is much better experiences to be had with the DLCs. Every day the rebuild is incomplete is another day with potential for future lost revenue. That's why I think it was such a missed opportunity to have I-80 rebuilt by the time Wyoming came. It would have really enhanced the Wyoming DLC and promoted sales for it.

ATS is a very long term project, and there could be dozens of map DLCs remaining to be released for it. For every person who quits ATS because the base map isn't that god, that's dozens of potential lost future sales. The problem compounds on itself very quickly when there are so many DLCs to be released in the future. They will make so much more money in the future if they pony up and rebuild the base map NOW, rather than 3 or 4 years from now. Same with ETS2, although that situation might be even worse because the ETS2 base map is in the middle of the map, which makes the problem more extreme because it's much harder to avoid than ATS where the base map is in the southwest only and can be 100% circumvented since the release of Idaho.
Last edited by oldmanclippy on 16 Jul 2021 14:34, edited 1 time in total.
P3TER_'s HoR confirmed map | Bedavd's ATS IRL map
Renault T Evolution | Санкт-Петербург, RU | Austria and Lyon rework IRL maps
Western Star 49X | Jackson, WY | ATS release order concept map
Top

GabrielT wrote: ↑
08 Jul 2021 13:12
I really think a SCS member should come here and take control of this thread. Saying hints, yes or no or later or... about Yellowstone. 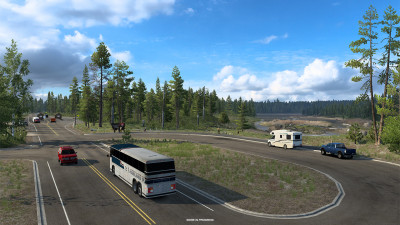 Yes!
What good is a world without good detail?
Check out my screenshots
Top

The clouds have parted, the angles are singing, people are parading through the streets, reveling and dancing and being happy. For Yellowstone is coming! Than you davido!!! The speculation is over, now we can patiently wait for what will surely be one of the best SCS DLC maps so far. Now we can finally talk about something else in this thread besides "will it or won't it"

This came unexpected... Thanks Davido

There you guys go. Hope you freaking happy now like jeez X_X
Top

Whattttt, lol. Davido is on the forum,lol. Thank you kindly Sir. Annnnnd he proved us wrong and actually teased us. Thanks for that post @GabrielT. All is good and confirms now, sweet. That is the South gate https://www.google.com/maps/@44.1325399 ... 6656?hl=en

I'll gladly take the delay to get up to that gate or beyond. That is a 27.2 mile trip to the Moran junction so that's a decent lil stretch of road. Now beyond that point, we have no clue what's to come or what's planned but at least we know YS is in the works now. So perhaps 1-2 miles at 1:20 scale is what we get from Moran. About another 1-2 miles to get to the US-191/US-20 split which is a somewhat straighter road. The plans for all this won't come anytime soon but at least there is confirmation now. We won't get all of YS though and we shouldn't with Wyoming. The coolest part (US-191) to West Yellowstone is definitively Montana. Depot in YS? Would be nice but if its not to be, at least we can get thru a portion of it. The question is, what portion.

@oldmanclippy Agreed. Devil's Tower finally checked off and now YS. So now its Cody and US-85 to talk about, lol. They are 2nd fiddle to YS but still key parts to the dlc. If Cody was scenic, it wouldn't be the end of the world. I just think it has enough industry to be marked. Then US-85 just sets up the future. It can always come later but it makes more since as an alternate route now for the detours feature. Its going to be quite a while until South Dakota comes. If we can get to Devils Tower via
US-16/US-14 exit, might as well add US-85 and connect it to both US-26 and WY-450 as a backroad route.
My post are only thoughts and ideas. Don't assume it makes ATS.
Poll: Choose Next 2 ATS States
ATS Flatbed
ATS Special Transport
North American Agriculture
Texas Discussion
Top

Thanks for pinpointing the location, flight50, I was searching for it somewhere near the West thumb

. We wouldn't get West YS for sure, but this road has to reach Cody now.

Now the map seems complete. The visuals look so impressive so far, this might just be the best DLC ever created for ATS.
Screenshots thread: ETS2|ATS