Hi!
Update 2.0 is out! Not many new parts in this update (there are some of course) but lots of other changes instead. Main huge improvement is the reworked cab model (together with reworked bumpers and headlights). This update is also the optimization update - number of traingles is drastically reduced but the truck looks even better

This version of FLB is based on Solaris36 edit for ATS. I spent a lot of time fixing/improving/polishing it and I think I’m finally ready to share it with you

. The list of changes is very long because I wanted to make this truck as good as I could, not just fix errors so it’s playable. There are still some things I would like to improve (so expect another version!).
In ETS2 you can buy the truck at Iveco EU dealers, in ATS at Kenwoth. In case you have any other FLB trucks, sell them before installing this mod, you will probably get lots of errors otherwise.

Sounds by the Great Kriechbaum and odd_fellow.

Starting with version 1.2 the mod is available in the Steam Workshop.

I also made separate mini-mods to support all available steering wheels (ATS) and accessories (ETS2). If you own some of those DLC, just subscribe to appropriate mods and place them above the truck file in the mod manager screen. In case of ETS2 there is also all-in-one mod file which supports all available DLCs, so subscribe ro just this one file if you own them all.

Thx mate for this mod.

First of all, thank you for your efforts Harven! The Freightliner FLB is my all time favourite in the ATS.
As such I followed every single new version, so let me share my thoughts of your version:

- 4x2 chasis revision
Big qudos for that! That was the biggest flaw of the previous versions.

- Pricing
I think one of the biggest flaw of the ATS/ETS2 is the lack of the used trucks. The truck dealers should have used trucks offers, even damaged but still usable trucks would do it.
Cheap, old, mod trucks are perfectly filling this gap. The previous versions of the FLB are great starter - and fleet - trucks. Even the cheapest possible configuration are still more usable then the cheapest vanila SCS configs. In the early game, with 8-10 quick jobs you can scratch enough money together for your first truck and you can avoid a loan.
Your version costs about the same as the new SCS supplied trucks. I feel this is as a contradiction, because the FLB is obviously an old truck, if I am not mistaken it does not produced since the 1990s. Also, even in your mod, the odometer on the dash shows some 900 000 plus miles, the OBD display - I LOVE that feature BTW - 3 million plus miles, right?

- Horn and light adapters
However I like the possibility to change the config of those, your sollution got rid the possibility to put extra lights to the top of the cabin. Please don't take this as an argument, but your horns feels too big for me, I would prefer to use those coming from other mods - most of them converted from ATS2 at least I guess. Could you please consider to change the restrictions of those adapter points?

- Fuel tanks
I love the idea of the different size tanks, but miss the look of the old, grease, used tanks. Not a big deal, however.
Top

I have found some bug in Templates.

Look at both pictures - in red field are painted sunshield. But it "colision" with other pieces of truck.
Can U correct it in next update or as "fixed: Template pls ?? 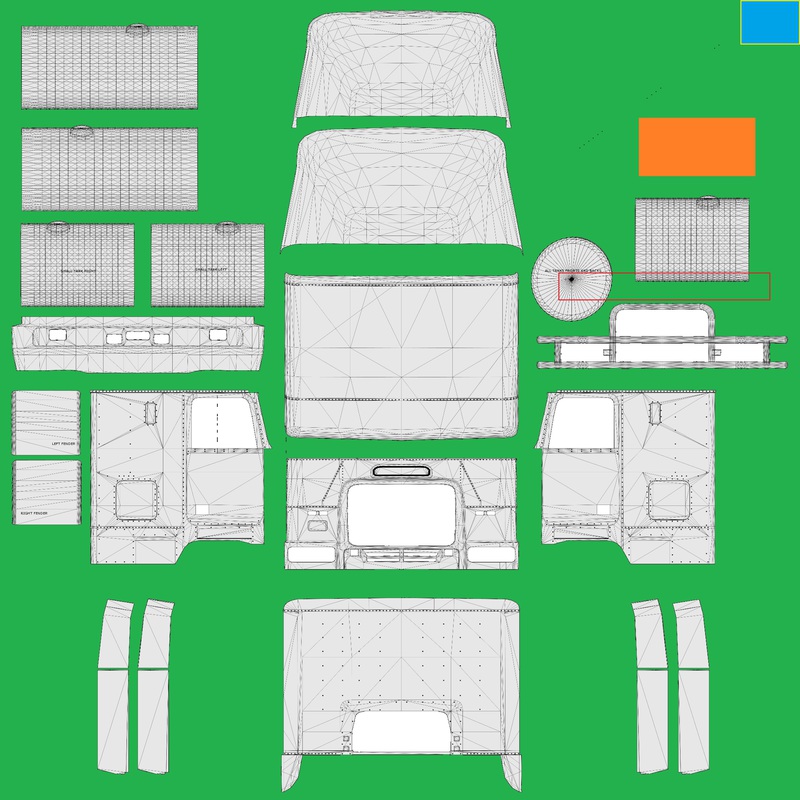 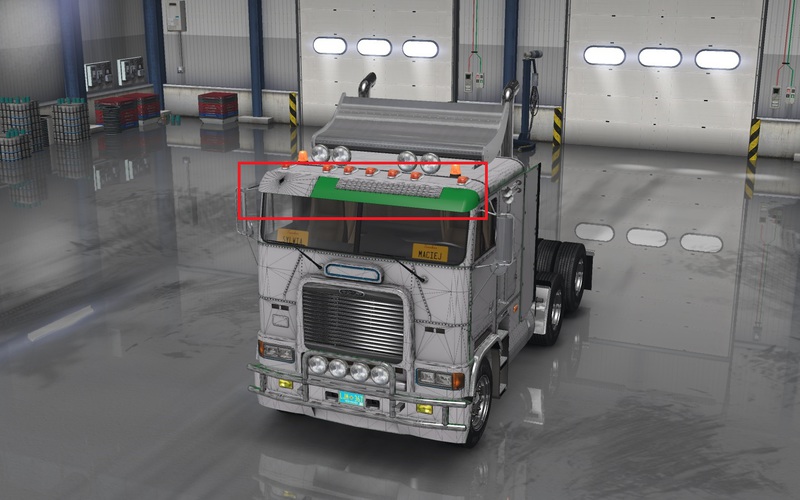 Thanks for the great update.
I edited a few sound files : redirected engine brake def path to the cat3406 sound folder in lieu of cn14 and increased volume, sounds great !
Put back the "double clutch" air gear sound in lieu of the default game Magnum sound, same for more vintage airbrake sounds.
Imo the engine sounds have to much post processing reverb in them.
Top

The only problem I've found with this truck is that I wasn't able to add horns to it either from the truck browser or dealership.
My Steam Profile (from SteamDB)

@Rene-Gad, I recommend SISL's accessories. They already have definition files for this truck. I could try to convert ats rims to ets2 as a side mod but I'm not sure whether it would be legal or not

. Also thanks for finding this bug, I didn't actually know that the sunshield is skinable. I will fix it in the next update. The question is should I move the sunshield UV above the fuel tank or move the tank a bit higher? There are already at least 2 skins using the tank UV but I don't know if there are any skins using sunshield UV.

@Sam.Joe, I did the price change because I didn't like the used truck idea. I mean it would be great to have this feature in ATS/ETS2 but as it is right now I feel like it's cheating. There should be some drawbacks of buying used trucks, like higher maintenance costs (faster parts wear), random malfunctions, some random strange noises and other things that would annoy you and make you wish to buy a new truck

But without those features making such cheap truck is equal to breaking the game's balance. That's of course only my opinion. I tried to keep FBL parts prices a bit lower than SCS trucks parts but only because FLB it smaller and simpler. I know it's not in production since some time, but in ATS/ETS2 you buy new trucks, so it should cost like a new truck. Maybe I can lower engines prices because they are less technologically advanced than the ones used by SCS but I don't think you can convince me to bring back the old prices from previous version. About the odometer on the dash, constant 0 would look silly

Sorry if all this makes you feel disappointed. Lets just hope SCS will implement some used trucks mechanics in the future

About horns and light adapters - there were no slots for anything on the top of the cabin in the previous version of this truck (edit by Solaris36 for ATS). However I can change the slots type to ets2 ones so you will be able to put all standard and modded accessories there (in the ETS2 version). I didn't think about this because the version I edited was for ATS and I just simply adapted it to ETS2.

And finally about the fuel tanks, I will think about it. I can't remember whether the dirty look was available for all tanks sizes of not.

@Jesan, what about detroit engine breake sound? Also what volume level did you set for it? Maybe if I like it I can include it in the next version

But I will leave air gear and airbrake sounds at default so other mods can change them.

Also tell me more about the cab collision issue. Was is with 4x2 chassis? And which trailer? it was a modded one if I remember correctly. Can you give a link to this mod?

DJSpeedy wrote:The only problem I've found with this truck is that I wasn't able to add horns to it either from the truck browser or dealership.

The truck in the truck browser should have the horns on it. If it doesn't it means some other mod is messing with it. Let me know if you find which one

I'm not seeing what Closed and Open does when one is selecting the dashboard trim. Anyone see what it does?