Download the package of the version you want, the trailer is part of (daf_95_ati_bdf_trailer)
Top

it's not the first time I have been driving this great truck, but yesterday it was the first time when I was driving with the owned bdf trailer in Black Sea DLC and game crashed when it was about to load the cargo. the error in gamelog is not helpful at all, is the damn arrays outside boundaries (cargo was from a city in Black Sea DLC) I was sure it's not the fault of this mod and indeed I tried another cargo in another city in the base map and this time it worked. also it worked from the same city in Black Sea DLC in a clean profile so at least I narrowed it to another mod in my main profile but which one?

I have very little experience with the owned trailers, anybody can tell me which are the bloody files responsible for owned trailers and cargo in a specific country?
for the time being I was pleased that at least I could load a cargo from the bade map and drive this beauty!

@cip, were you using any map mods and did you take the jobs from cargo market or external market? As there are known issues with using map mods together with external contracts/market.

King Leo wrote: ↑
02 Jun 2020 20:49
@class40
I see. I thought you were making fun of what the film said. I assume you're considerably younger than me because otherwise you'd have a different point of view. In those days, these were all revolutionary innovations. Nowadays, it's all taken for granted and is standard equipment. But at that time it was all new. It was even new at that time to have a steering aid and mirrors that were bigger than the wife's compact.

In the 80s there were hardly any large cabins. Actually only Volvo, Scania and DAF. At Mercedes, MAN, Ford and Renault rather claustrophobia was the order of the day. Have you ever driven a MAN with a fuller gearbox? Nice with intermediate throttle? No synchronization. Those were the days.

@Deisu nope he pointed that out

hi XBS, i have noticed something, on the 6x4 model, there is no interconnecting drive shaft!, also on the 1.38 update, any chance of full arches on both rear axles of the 6x2 please?? (and it also lost its horn too)

as for a 95XF, someone is making one on the forum
Top 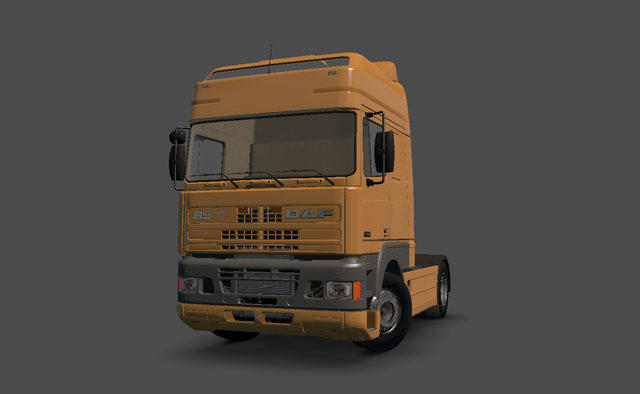