ThatWeirdTrucker wrote: ↑
30 Jun 2020 19:04
I don't like how some people are saying Idaho is coming out much further than it really is.

Well the issue, there is no date so we really have no idea what SCS is targeting. Your speculating just like the rest of us my friend. Sure the records indicate SCS does early releases but we can't have a bad Idaho release just to make an early release. The harm is greater than just pushing it a week or too if need be. I hate to tell you my friend, but it could slip to week 2 or 3. Just like everyone thought I was crazy for Idaho coming 1.38 instead of under 1.37, you really don't know what could happen. Sometimes patterns are predictable and sometimes they aren't. But one thing we are sure of, is that Idaho is on the horizon and should drop within the next 2 week. Next week is a possibility but so is the following week. If you want my gut feeling.....25% chance Idaho drops next week. 50% chance it drops the second week of July and 25% chance it drops week 3.

I think by the end of the week, we can see how the bug reports are going and what's getting fixed. The critical things are obviously priority. The things that are not game changes shouldn't have too much of an affect on Idaho itself.

@Sora To do a ST, the prefab has to not only be large enough but it can't be overly complicated for the casual driver so Tidbit is out. If they showed a silo/box on the blog, my guess is a farm. The green boiler goes to Grangeville as it fits ID-55/US-95 and the mobile house goes to Nampa. That leaves the silo and the box to Challis. Looking at the landscaping in the blog, it fits Google Maps. But farmland is all I really see in Challis. Challis definitely isn't world famous to my knowledge. It could be Tonopah or Pioche in nature. Also small towns that just so happened to get mapped.

Have you actually zoomed in to compare Grangeville, Price, or Vernal to Challis. Challis is much smaller as in half the size. Without all the green farmland around, Challis is easily missed on the map. So I'd say its near Salmon too, lol.


maskmcgee wrote: ↑
30 Jun 2020 21:06
"the Challis" obviously refers to the Salmon-Challis National forest, not the city. Why else would they call it a 'the'. Also explains why they called it Salmon City, as 'the Salmon' would be the same place.

Why would we take anything to a forest? That doesn't make sense. I doubt we haul ST loads to the forest. To uneven of a terrain and nasty curves. We haven't made one ST load to a forest yet. "the" in the blog could very well be a typo. Its not the first time they included a typo in the blogs.
Last edited by flight50 on 01 Jul 2020 00:01, edited 3 times in total.
DON'T BUY SHIFT KNOB FROM CSIO OR TA! YOU'VE BEEN WARNED!
*Poll: Choose Next 2 ATS States
*Poll: ATS Flatbed
*ATS Concept Map
*ATS Special Transport
*North American Agriculture
Top

I was wondering the same thing. Don't think maskmcgee's explanation makes much sense either. I'm also guessing it's a typo. However, if anyone cares there is actually a hotel in Sydney/Australia, called "Hotel Challis" or simply "The Challis"......

LPS wrote: ↑
30 Jun 2020 19:32
Remembered this picture from previous blog posts was looking around on Google Maps seems could be Challis ID.

Yes that is Challis. But that's not really new, has been known for a while. But it's understandable, this "Idaho thread" has become damn thick and is still growing rapidly so of course one can easily miss something. A few weeks ago this photo was already discussed, mainly in the context of the criticism of the SCS
mountains frequently heard at that time. Some expressed dissappointment about the "rounded off" mountains in the backround, said that the mountains
around Challis should look more rugged and imposing. If i compare it with the real photo i have to say SCS is not that far off if you ask me. Looking north/northeast from this position, these mountains aren't that imposing in real life either, appear neither particularly high nor peaky. The really imposing mountain ridges can be seen when you look south/south east for example.
Top

I hope that Challis is in as marked. I don’t think it is, personally, but I hope so. I’m very worried the north is going to be so thin that we get the same complaints as we got with Utah and people start to turn away from ATS. Even if there really is nothing there people will still whine about it. A more fleshed out south might help combat that.
Check out my Michigan research map!

Check out my ATS IRL map!
*Las Vegas has been mapped along with all other 1.38 roads, LA and SF are unmapped out of protest for their future rework*
Top

@Bedavd running away is my concern as well. Luckily Colorado follows it. Texas would me a huge impact put it can't be rushed. Montana will help out Idaho a ton but we can't get it before Wyoming. But yes, Northern Idaho is what it is. Any help it can get would be nice which is why I think its so critical to get Missoula or Lolo at least. More people would by Idaho if more was in the North to connect to. People that complain about taking away from Montana make me scratch my head. 9.9/10 they will buy Montana anyways so they would still get Missoula anyways. Whether you buy Idaho now or later, Montana when it comes or 2 years later, you will have both. Idaho just needs a little help in the North from Montana can make or break how people feel about Idaho.

Looking at it from a state borders aspect is not the best way to help Idaho imho. Looking at your routing and your options to travel is however the way I am thinking. Borders mean nothing to me. Sure I-15 would be much as it gets us from SLC to Spokane much faster than US-95 or US-93. But I can settle for US-93 and leave I-15 to Montana. Even though no matter what, we'd get it with Montana. If people stop at Idaho or even Colorado and never buy anything else, you just short changed yourself Missoula/Lolo. You are also not who SCS is targeting. That little bit of a difference could keep you buying into ATS more. If not, you were in it for the wrong reasons anyways imo. Why keep buying? Because you like what you are playing/getting. So again, what does in matter if Missoula came with Idaho or not if you are going to buy Montana anyways? I am sure there will still be resistance to this thought still even if people comprehend my words. But I stand firm in my belief. What does it matter if your plan is to buy more dlc's. One city will not change the price of what SCS was going to sell the dlc for anyway. Not one city that is on a border anyways.
DON'T BUY SHIFT KNOB FROM CSIO OR TA! YOU'VE BEEN WARNED!
*Poll: Choose Next 2 ATS States
*Poll: ATS Flatbed
*ATS Concept Map
*ATS Special Transport
*North American Agriculture
Top

Regarding the language SCS used in the latest blog post, I chalk that up to them being foreign to the US and not fully polished in English. That first picture they posted is at the following location between Moore and Mackay, my favorite town in Idaho, mainly for its location to all of the great mountains and back roads all around. 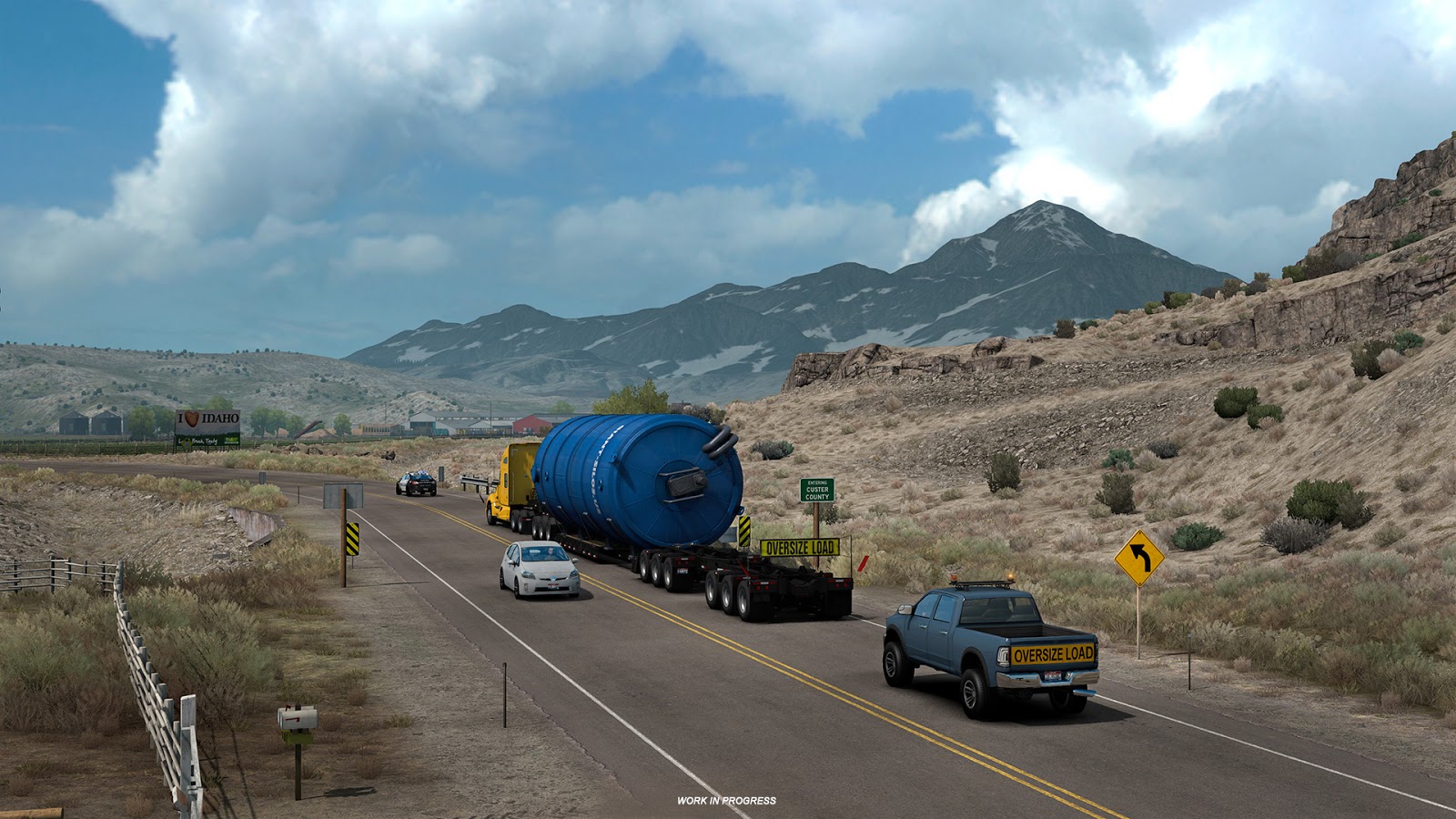 That is the only option, given the route is Idaho Falls to Challis. Custer County does cover the next valley to the east (to the right in this pic) on the other side of the range where there is a road, but it is more remote and half of it is dirt. It would not be a road that would make the game. This is the first time we've seen a picture of part of the Lost River Range, Idaho's highest and tallest (meaning base to peak relief). I know we all hoped SCS would step their game up on larger mountains, and I have no complaints at all with the scale they depicted here given their real life proximity to the road. I would have to say this looks perfect. Time will tell what the rest of the range looks like. I travel to the Mackay and Challis area every year for picture trips and am headed there again on Friday oddly enough. Way too cool that Challis is in as a delivery town. I was originally hoping it would make it in as a scenery town.
Top

These two probably not at all considering the space CDA took. Also there are two pass/summit in ID-MT border and 4th of July summit which need space for better elevation depiction.
Top

fra_ba, Kellog would be interesting to get, someday, due to I-90.
And yeah, if they depict Fourth of July Summit, then there will not be any space for anything else for Idaho, east of CDA.

What if "the Challis" just means "the Challis Valley"? This would make sense: I think Challis is not a delivery town at all. I think Salmon is. But if SCS would have written "Idaho Falls to Salmon City" then the most obvious route would be via ID-28. But we all know that the screenshot must be taken somewhere on the US-93, as there is a sign visible that says: "Entering Custer County". And the ID-28 nowhere runs through Custer County. US-93 does, however, and one of the borders of Custer County is at Darlington on the US-93, between Moore and Mackay, as Darran K wrote in his post.

I will answer well for you all this region of Kellog.

I could already put on the map then there would only be a connection with the state of Montana and in that region there is a lot of mining remember that one of the posts that SCS Software made was that their goal too it's offer a lot of mineral loads in the state that is known precisely for mining.
Top
Post Reply
3675 posts