Well here we go.........Texas. The one state that always seem to pop up everywhere in other threads. Now we can channel thoughts here. It is no secret that SCS is currently developing it. Pavel let that be known last Summer in 2019 when he broke the news letting us know that he had someone working on it for 6 months (at the time). Fast forward to today and its about 1.5 years in now. Preliminary or not, work is work and Texas has begun. Idaho nor Colorado is released, I understand that. But Texas has been revealed as w.i.p, so here we go.

So considering that info and from inspiration from another thread, here is that “Texas Discussion” thread. I feel that its appropriate that I as a local Texan, get this party started. There are many of us from Texas that are part of this community. I am sure you all see more than just myself always mention Texas. Not only Texans, but many from the community from all over seem to have a high anticipation for Texas. Its size and what it will bring to ATS will be a huge weight off SCS's shoulders and a joy to have in our ATS world once it arrives. The day Texas gets blogged, will perhaps send a ripple thru the community.

Texas could be on the menu as soon as late 2021 imo. Most of us would rather see it on the menu for 2022 though for various reasons. Summer or Winter works for 2022 but if 2021, Winter seems like the best fit. If it was started in early Jan/Feb 2019, it really depends on when it can get a full production team behind it. That is what could determine its release year. There is a lot riding on Texas so the more development time, the better which is why many of us would rather have a boxed up map now with Wyoming/Montana (based on the current ATS poll in my signature) and provide that extra time for the devs for Texas coming 2022. I don't expect all to agree and that's fine but lets face it, Texas could be 2021 or 2022 at the latest if they are currently working it.

Texas as a whole has 41 cities with a population of more than 100k. (6) are in the top 25 that have more than 650k alone. (13) are in the top 100 that have more than 235k. This kind of roster will make a nightmare of a state to map. Imagine the assets required Texas is the largest of the lower 48 in the US so there is tons of room right.....not exactly. At 1:20, scale will put its limits on Texas just like any other state. There is a huge road network that Texas will add to the game as well as a huge city count. So the devs will definitely have their work cut out for them. I got to meet a few of the devs at GATS 2019. Very cool group of guys. I enjoyed hanging out with them for 3 days. I am sure they took in as much information as they could but Texas is impossible to cover in a few days. Its just too large as a whole. The main population for Texas is part of what I like to call the "Texas Triangle". That is the area that covers I-35E, I-35W, I-45 to I-10. That's the DFW, Houston, San Antonio and Austin areas. Those are 5 of the 6 largest city's in the state. El Paso is the only remote city of the top 25 I mentioned.

DFW and the Houston area will be nightmares alone. These areas are HUGE. There are only 3 areas in the US that are larger. (2) of those are not even close to being in the game. If we are lucky, the no.2 rank will get a massive rework to make it feel its size. I am sure our Los Angles community members here would love that one, lol. Anywho, if you zoom into Google Maps or any map, you will notice the huge amount of interstates and junctions in DFW and Hoston areas alone. The devs can't do it all.....or can they

. I think they can get somewhat close. But to do this, I think they have to cheat these huge metro areas a bit. What I'd like to see is the outer limits stretched out a bit. Its a game and hurts nothing. For example, DFW is 9,200 Square miles. So to cheat this, add 15%-20% to this 9,200 sq miles (14,805.96km) . That gives us 1,380-1,840 extra square miles to play with (2,220.895-2,961.193km). That increases the real estate to allow more room for interchanges and highways. In expanding like this, cities that are large enough can get absorbed by either Dallas or Fort Worth. Prime examples are Denton, Texas and perhaps Waco Texas. Denton is the home of Peterbilt Trucks. Like Kenworth they are owned by Paccar. I am sure most of us would love to have Peterbilt join the ATS roster to be able to deliver trucks and cargo to and from this facility. But its no guarantee to make it. Below is the example I mean by adding 15%-20% What else can Texas offer:
Fortune 500 Companies
Texas is home to 54 of the US's top 500 companies. At the top of the list are companies like Exxon, Phillips 66, Valero and Conoco with a huge presence in Oil & Gas. But there are other huge ones like Sysco, Halliburton, Flur Corporation, Kimberly Clark, Whole Foods, Waste Management, Dean Foods and D.R. Horton. These in my honest opinion could be factors not only in Texas, but around the US. Not to mention all the other top companies that exist thru out the US period. Companies that are not part of the 500 should not be excluded. Companies like Livestock Investors, Frito Lay, BNSF Railway, Texas Instruments, Dr. Pepper, Fossil Group and Academy all can play big rolls in bring their products and services to Texas and the rest of ATS. Now all these companies I list are just a few I name but by no means are they themselves guaranteed to come. I am big on industries, cargo and new companies and I just think Texas should be able to incorporate several from these list of companies.

This discussion thread along with the public research thread should be able to generate a ton of info the Texas dlc. Although Texas has not been announced, as I said above, its no secret to the community that its being developed. So while there is plenty of time left, there is a lot we the community can add to the mix. I always like to think that its better to have too much information than not enough information.

Option 1. The "Ideal DFW". This has all the major roads and all the major junctions. Note all the interchanges. Use the Legend to figure out what is what. Below are the locations that are a possibility to come with the Texas DLC. I made one in the Public Research thread here, but that was back in 2018. This new one is current day thinking, lol 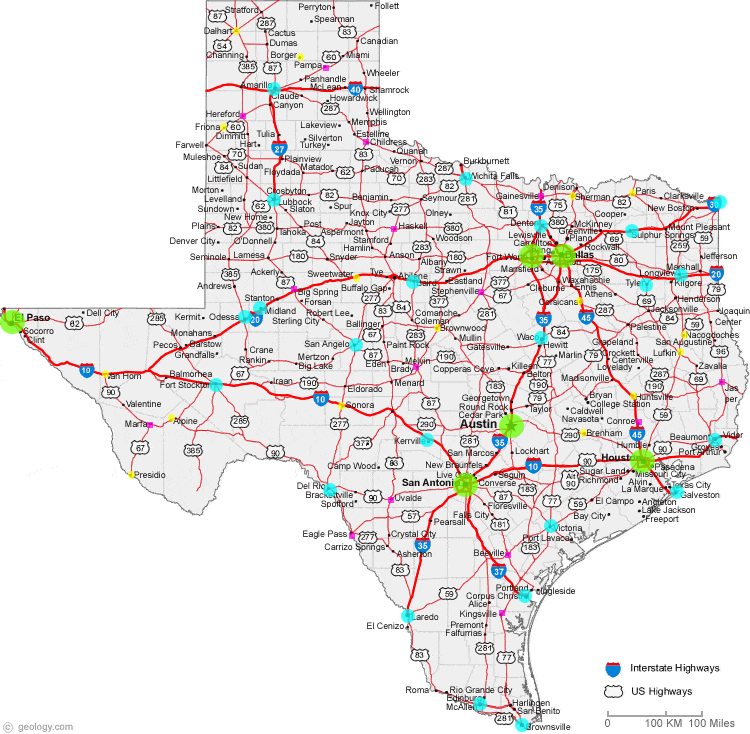 It took you long enouph

do you ever sleep? Dallas is 8 hours behind Greece, 3:20am when you posted?
There are naive questions, tedious questions, ill-phrased questions, questions put after inadequate self-criticism. But every question is a cry to understand the world. There is no such thing as a dumb question.

If Texas is after Colorado, of course I would never say no. I hope Texas will bring more company diversity to ATS as a first. I want him to set up a refinery company in his Chemron like Gallon. Texas; It has mining areas and forest products producers in the east. I would also hope to see nuclear power plants just like ETS2. I would definitely want Texas to appear intense in the car factory in the south of San Antonio, the oil and chemical industry, mining, animal husbandry and many more.
Top

I'm really looking forward to texas.. but it will take a long time until i see my favorite US state and city on ATS, which is Atlanta/GA.

Texas will be a big release with lots of sales, I would think. It will also promote sales of the adjacent states. I am looking forward to Florida and being able to do a coast to coast with SCS maps. We may be a year away from seeing Texas, so I must be patient.
Top

I hope the chemical/oil production will shine with Texas. Exxon, Marathon, Citgo, Velaro, and more all have major refineries there. Plus I know that Dow Chemical, second-largest chemical company in the world after BASF (and headquartered in Midland, MI. You know I had to find a way to work in MI lol) has a TON of facilities in and around Houston, the largest being on the gulf coast in Freeport, TX. Dow has a CRJ-700 that flies constantly between Midland and Freeport for that reason. It'll be really cool to see how these giant refineries and chemical plants are implemented.
Check out my Michigan research map!

SCS is probably going to have to cheat west to fit all of the "triangle" in even in an abbreviated version, the good thing is Texas is huge even at 1:20.

Maybe they expand those larger city areas into the Llano Estacado a bit.
Top

Texas sounds exciting for its large size and probably would be the biggest map expansion for a DLC.

as for companies I would be interested to ship cargo from the Peterbilt assembly plant in texas as well as other amazing cargo hubs in Texas.

like to explore new areas of maps for both ATS and ETS2.

Wouldn't it be funny if SCS decided to build Texas at a 1:1 scale just to mess with us?

Of course that would take eons to do, but would be a good joke.
Visit my World of Trucks profile and say hi!
https://worldoftrucks.com/en/profile/4918521
Top
Post Reply
569 posts