Forum rules
SCS as a company do not wish to have paid mods on this forum. While we understand that not all paid mods use the Intellectual Property of other companies/people, it is very hard to moderate what is and isn't acceptable when money is involved. There are also concerns that it could look unfavorable to potential work partners going forward if SCS allow mods that may potentially use unlicensed branding.
Posting in the Mods forum (ATS and ETS2) is restricted to sharing free-to-the-public mods and providing support for mods. For more details, please check chapters [4] and [5] of Forum Rules.
Post Reply
452 posts

Thanks for creating the patch, especially since I also just finished a compatibility patch, but instead of replacing my San Diego with the vanilla San Diego it rolls back Pazzmod's changes to I-8 between San Diego and El Centro back to 1.2. I'll link both patches in the OP and people can decide whether they want a small 2x2 highway between Carlsbad and San Diego or a lackluster rendition of the I-8 going through the Cuyamaca Mountains.

I believe my patch erases Tijuana from the map if you're not using the Pazzmod standalone version. Hopefully using the Mexico version will at least not crash, I haven't tested it.

CA-111 between El Centro and Calexico also has a hole in it, I've noticed that. Fixing it without overriding yet another Pazzmod sector is impossible, just avoid it for the moment.

Hopefully this patch is only temporary. I plan on redoing the Carlsbad-San Diego I-5 stretch again for proper Pazzmod compatibility, but that's 2-6 hours of work I can't really spare at the moment.

Compatibility headaches aside, v11.3 is out now. It includes some hidden higher speed limits inside some cities, to make cars overtake you more often and give you the impression of a busier freeway. I-10 in the Phoenix region has been widened, from the 303 loop up to the Sky Harbor Airport exit.
Top

I am seeing a wall right before entering San Francisco. I am following the current load order using all the most recent patches. are there any specific mods that could lead to this 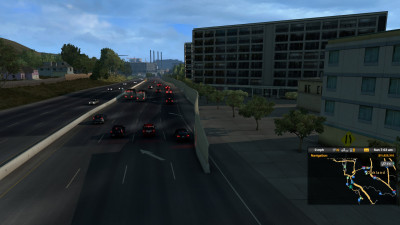 It's a weird, inconsistent glitch. I fixed it ages ago but forgot to apply it to the Sierra Nevada compatibility patch, apologies. Go re-download the patch.
Top

I really love your mod together with PaZz "little" map mod. Any news on the work on a proper connection patch?
Top

By "proper" they probably mean a patch that keeps both mine and Pazz's changes to the San Diego sectors, instead of having to exclude one of them. Not this week, sadly. And with MSFS coming out next week, probably not this month.
Top

@Quaristice any time I try to go to Phoenix using 11.3 of Minor urban Overhaul it crashes.Am I doing something wrong?
Top

I'm joining the game and crashing when I open the world map, and it's this mod causing a problem cause the game works without it. Anyone else experiencing this?
im a man of culture
Top
Post Reply
452 posts