Hi everyone. As averyone knows the DLC scs makes the last years are from excellent quality. Sadly there is a big contrast with the base map which consists out of old assets and the old vision of routing. Due to the lack op some important routes, or routs which are represented smaller as they are I decided to make an overview of which routes are desired in my opinion, and which might fit as well taking the scale limitations in consideration. (Admins: I did a research if such a topic already existed and didn't find one. In the unfortunate case I've missed one feel free to notify me). 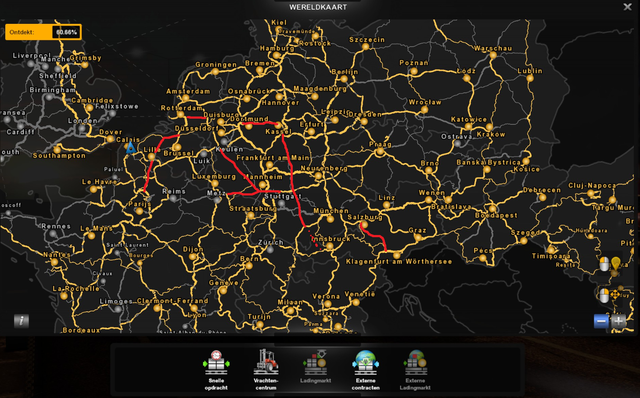 About Belgium in specific, There are only two cities represented, both in the French majority. Since Belgium also has some important harbours (Antwerp, zeebrugge) at least one of these cities in the area of the Dutch majority represented would be nice. There's also a balance then between both regions (both have an important city represented and there's the capitol of Brussels, where all languages are spoken.

About Germany in specific. The Ruhr area is not represented with its right connections. For example the A40 to The Netherlands is an important road in that region. Also the extension of the A2 and the A3 are missing in this region (well they are kinda represented, but not as Autobahn).
Top

About Antwerp, some SCS staff had said in the past that was a mistake of them to don't include it. In a future if they rebuilt the zone like in Germany maybe they change that.
Top

When the poll said A6, I thought you meant the A6 in England! That would be a great road to have if we had some of the locations along it included in a revamped UK map (Carnforth, Kendal, Preston, Chorley)- we already have Carlisle at its northern end, so why not? It almost parallels the M6, so would be a great alternate route if a random incident blocked off the motorway.

Mannheim does need more routes in and out of it, though, it feels way more remote than it should.
Scania forever, 'nuff said.
Top

What about the missing part of the German A5 and the Swiss A13?
Top
Post Reply
4 posts • Page 1 of 1