So a few of you might remember the addon I created for the WoT website for last year's Xmas event (thread here).
This is an updated version of that addon to work with this year's event (2020).

This is an addon tool for the Xmas event section on the WoT website homepage.

Advanced Stats
More progress bars to show total amount of hearts/gifts for each game, and how close they are from being completed.

City Sorting
Buttons added to both game columns to sort all the cities by: Other Stuff
Preview: 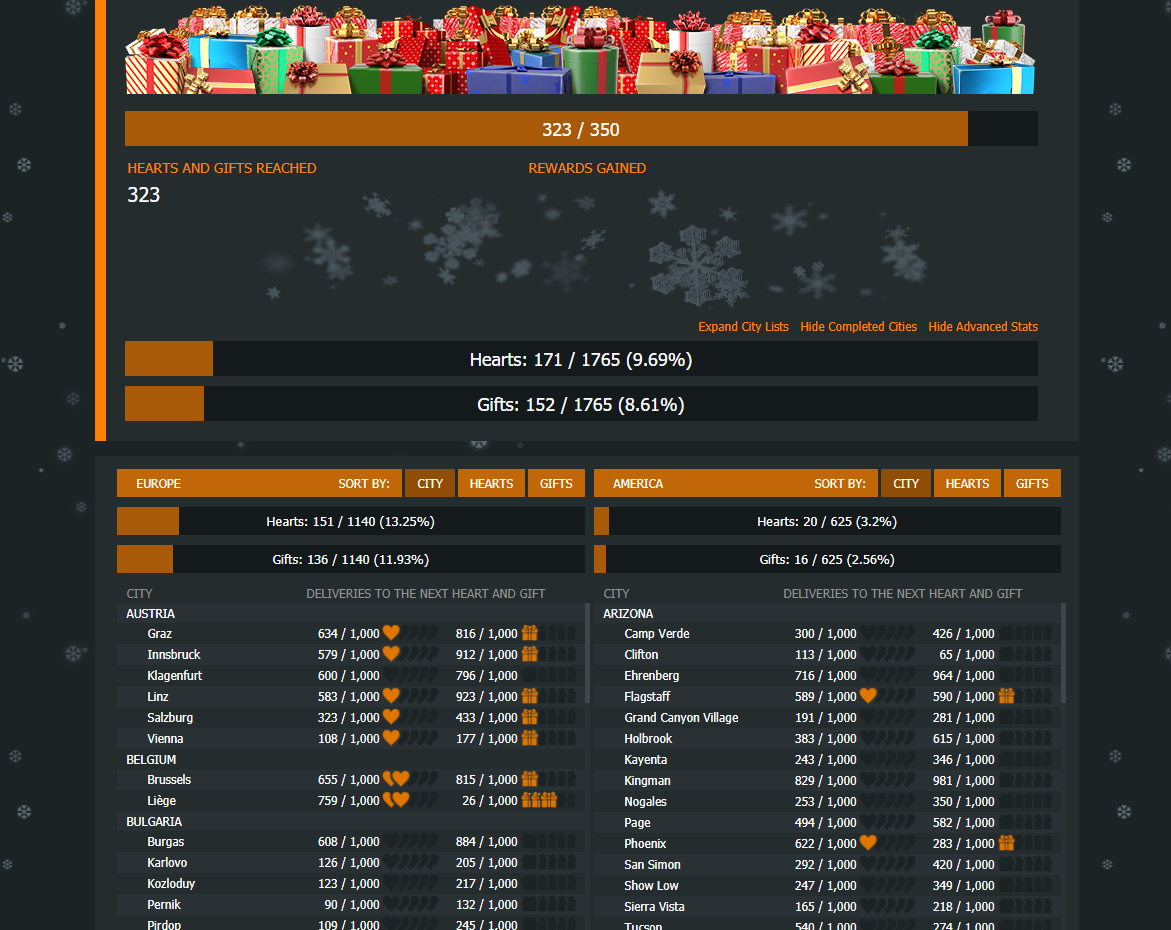 How it works:
Note: No personal data is transmitted, accessed, and/or modified in this addon. The only data it sees and touches is the number of deliveries for each city.

The WoT website fetches updated data for the event every 10 seconds (if you keep the page open), then updates the main progress bar and the number of hearts/gifts for all the cities.
The addon is setup to also receive this data, which is then parsed, sorted, and some calculations are made, after which all the advanced stats that it adds get updated.

The script starts running when the page is loaded, but needs to wait for the site to fetch updated data (usually about 10 seconds after the page is loaded) before it displays all the advanced stuff and buttons.
There's not really a way I can get around this, as I don't have access to the data until that first fetch (the data displayed on page load is rendered by the server, not by a script).


Using the addon:
There's a couple different ways to run the script.

1: (Recommended) Using the Tapermonkey extension for your browser. https://www.tampermonkey.net (available for Chrome, Firefox, Edge, etc) (if you still have the script from last year installed, disable it in the Tapermonkey dashboard)

Tested on latest version of chrome, but should work in firefox and edge aswell.

Why did I make this?
Last year, nearing the end of the event, I wanted an easier way to see what cities still had deliveries left to do.
That's it.
Then I added extra features because I was bored lol.


If there's any other features anyone wants to see, please let me know and I'll see what I can do.
World of Trucks Profile
Top

Programming this must have been a lot of work. I will download and check it out.
Many thanks for the addon and merry christmas to you.

I liked it a lot last year, thank you for doing it again for this event

Is it possible to check how many stars and gifts we completed as community at the end of event?
Click here to check my profile

No mods, no cheats, no console